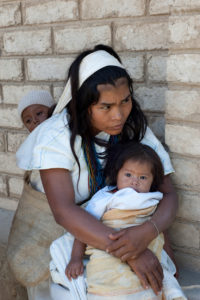 The zagas, female spiritual leaders of the Sierra Nevada de Santa Marta, are walking the entire Linea Negra (Black Line). Pictured here is an image of mamos and zagas (spiritual leaders of the Teyuna) energizing the journey they will take to travel the perimeter, about 400 miles, around the base of the mountain that is there home, the Heart of the World. They begin this Monday, October 8, 2018.

The Linea Negra surrounds the Sierra and delineates 348 sites sacred to the Teyuna, and crucial to the ecosystem that supports 80% of Earth’s biodiversity.

Women are sacred to the Teyuna. They are a living example of the power of love and the creators of life. They are revered for lighting the darkness and represent all that is.

Guillermo Rivera, Minister of the Interior in Colombia recently said through his Twitter account that “the Government will support the Linea Negra defined by the indigenous peoples of the Sierra Nevada de Santa Marta.” The measure recognizes that protecting the Linea Negra is crucial to the environmental and cultural wealth of the country.

The draft of the decree has as its backbone Judgment T-547 of 2010 in which the Constitutional Court swore to protect the Linea Negra as a fundamental right of the Sierra Nevada.

The signing of the decree is in the midst of controversy because the delimitation of the Linea Negra and its 348 sacred sites prevents economic activities some of which has been occurring in the area for decades. 294 sacred sites are compromised by municipalities in Cesar, Magdalena and Guajira states.

The new decree would re-affirm the validity of 348 sacred sites, but protect only the 54 closest to the base of the mountain.

In 2014, territorial integration occurred in the city of Santa Marta that took into account the rights of the Sierra peoples, and transversal delimitation of the Linea Negra was articulated favorably. The Teyuna hope that what occurred in Santa Marta can occur in Cesar, Magdalena and Guajira states and so, the women of the Sierra are walking the Linea Negra on a mission of love for the planet, our collective home. To support their journey please link here.

Thank you for your commitment to Earth Stewardship and for supporting the people who support the planet.

In Her Service, Mary