Last August I had the good fortune to meet some Teyuna spiritual leaders from the Sierra Nevada de Santa Marta in Colombia. These “seers” are known as mamos and zagas, and their lives are devoted to ecological protection and healing. Although they rarely leave their home, last summer they came to the U.S. to bless sacred sites around the country. Amazingly, one of their stops was the Berkshires, just a few minutes from where I live.

Before their visit, I had never heard about the Teyuna or the mamos. Their civilization is ancient, but largely unknown. When the Spanish invaded Colombia and began to colonize, the Teyuna relocated to high elevations, used their unique spiritual practice to shroud their existence, and refused to be colonized at all costs. As a result, they continually deepen and strengthen the inner balance which is a hallmark of their civilization. Today, they’re one of the few surviving pre-Colombian civilizations in the world. For millennia, they’ve maintained a spiritual way of life in harmony with nature, the Great Mother.

The Teyuna believe that our earth is a living being, and they are the “older brothers” who keep things in balance through their ritual offerings (pagamentos), meditations, prayers, and songs. Many mamos are raised for up to nine years in the dark in order to develop their inner organs of perception and connect to the cosmic consciousness. Because they’re always listening and attuning to the natural world, they know that they’re not separate from her. And they want us—the “little brothers”—to understand that, too.

The Teyuna consider the Sierra Nevada to be the “the heart of the world” – and they, its guardians. What’s interesting is that almost every known ecosystem on the planet exists in the Sierra—it’s a treasure of biodiversity. And because the region has such a unique ecological structure, it mirrors the entire planet. This means whatever earth changes happen there, reflect what’s happening everywhere. So, when the Teyuna noticed that their snowy mountaintops were becoming brown and bare, they got concerned. They realized that something serious was happening and, of course, it was. This serious “thing” was climate change and global warming—which they predicted decades before the scientists.

After spending a few days with the mamos last August, I experienced a profound shift in my relationship with the earth. It’s hard to explain, but nature became so much more alive to me and I realized how essential it is to slow down and listen… really listen to the rivers and the trees, the wind and the stars. They taught me that we’re all one family on this planet, and we share the same Mother. When we exploit her, we destroy ourselves.

This June some of the mamos will be back in the area – and I’m so happy to let you know that they’ll be offering a week of programs in the Berkshires from June 11th – 15th. See full schedule below. Everyone is welcome to attend, and all proceeds will support the Teyuna Foundation. This foundation, stewarded by Mary Gaetjens, is doing really important work to help reclaim sacred Teyuna land that’s been destroyed by mining, deforestation, colonization, and more.

On June 14th, there will be a special solstice celebration at Sruti Yoga with the mamos, followed by a kirtan with me, Charlie Braun, and Charlie Shew. Together, we’ll weave an offering of love and devotion to Mother Earth. Please come! We have much to learn from these wise elders. 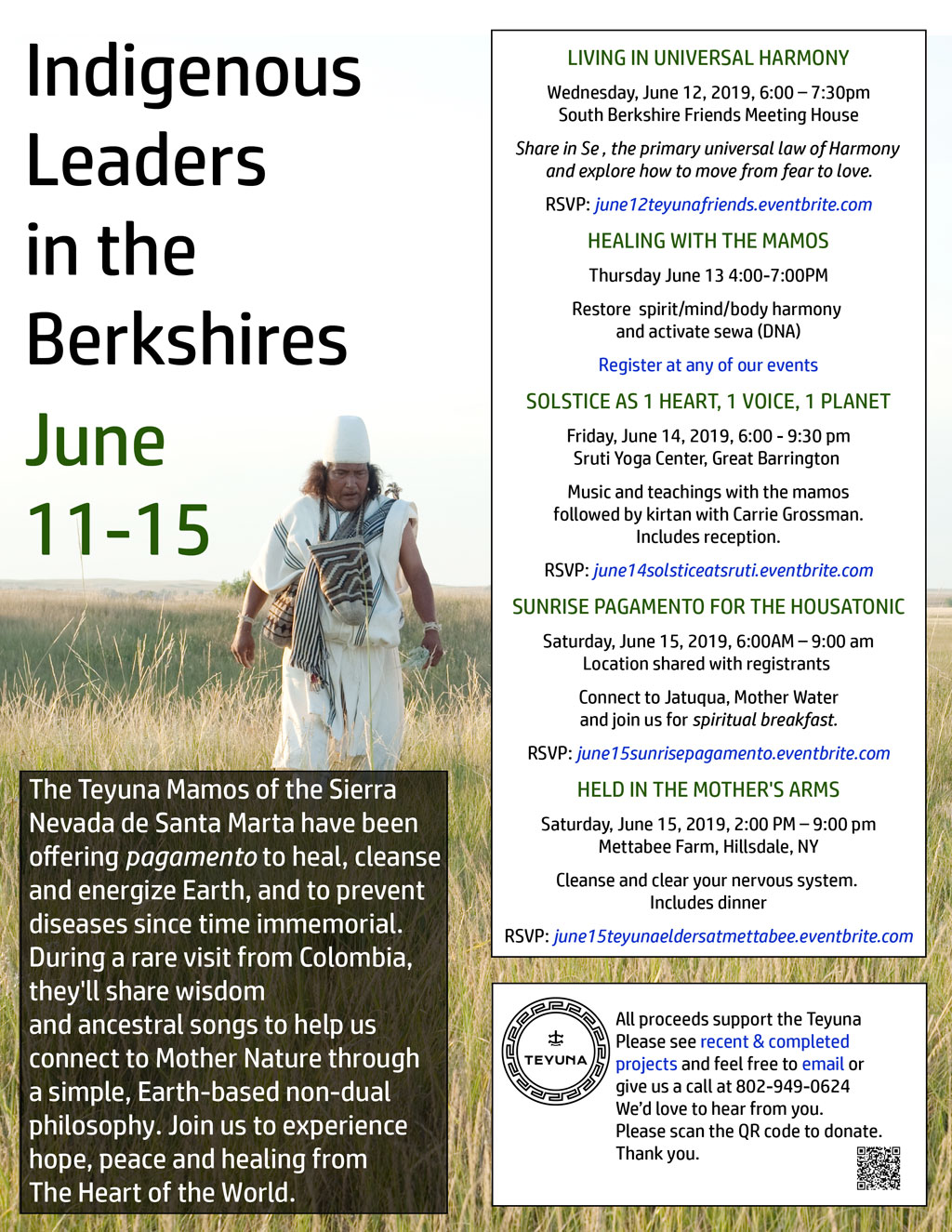