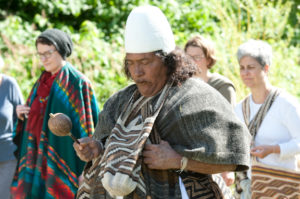 Sagacity sə-găs′ĭ-tē combines the qualities of discernment, wisdom, and foresight. It’s Latin root is sagācitās, containing the word sage, wise one. Sagacity is the closest I’ve come to finding one word that embodies Teyuna Elders, one word that points to the inspiration to shift into awareness. One word that defines why people cry when the Mamos and Zagas enter a room.

When we ask people what about being with the Teyuna Elders moved them they often say they felt hopeful suddenly, or felt overwhelmed by innocence and purity. What people see beyond that, maybe on a level they can’t explain is awareness. The Mamos and Zagas are one with awareness. They are the trees, the mountains, the ocean, all flora and fauna all the time and effortlessly.

When I first met Teyuna Elders I was awe struck that they what to do in every circumstance. Now I know it isn’t true they know what to do. What’s true is they know how to listen and they know they’re not separate from anything in creation. They know how to read signs from Mother Nature and the cosmos, so they never hesitate to act on the information they receive. There is complete sagacity in every situation.

As far as I know, no other culture communicates directly with Mother Nature in unbroken lineage the way the Teyuna do. It’s pure, natural, simple awareness: sagacity in action.

The other word that makes up sagacity is city. The city I live in has seen better days. It saw it’s best days when there were 80 tribes occupying the area, living in harmony with Mother Nature. The Latin, civitatem means citizen. A city was originally a community of citizens. People don’t look at each other on the street anymore. A city is not a community for most. People don’t feel safe to connect anymore and are feeling more lonely than ever. Even before lock-down loneliness effected so many of us.

Loneliness deteriorates physical and mental health and we at the Teyuna Foundation would rather you not be lonely and the Mamos and Zagas for the sake of Earth want you to be happy. The spiritual Mothers and Fathers thought all of existence into reality and we continue to think our reality into being. Life is more pleasant for everyone and everything when we’re happy and we get happy when we become aware and working with the Teyuna Elders in community shifts us into awareness.

Mamo Atilio is offering a session this Thursday the 28 at 9:00AM PDT, noon EDT. Won’t you join us?

Mamo Atilio transmits segwa in his sessions. Segwa means “to awaken the sacred seeds.”Segwa re-members our original human blueprint we were born with, the blueprint that moved further and further into our unconscious as we separated ourselves from all that is. It’s possible but rare to suddenly shift into awareness. Mamos and Zagas initiate shift through sharing segwa.

Segwa jump-starts our ability to embody awareness. Truly, what takes effort in the first place is struggling against awareness, but most of us need help letting go of struggle. It takes glimpsing awareness to feel what it’s like not to struggle. Tricky! – but true. We prevent ourselves from seeing truth by trying to see it.

Working with the Teyuna has put me and many others solidly on the non-dual path. I’ve learned to be – be the trees, the mountains, the ocean. What do I mean? I’ve let go of comparison (for the most part – it’s a process). The Teyuna, like the Tibetans and many wisdom keepers, declare that our need to make comparisons between this and that is the foundation of our suffering. It’s what makes us feel alone in the world. My personal experience tells me I agree. I’m certain a sagacious world is a more pleasant world.