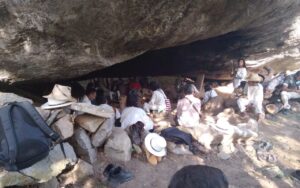 Order your thoughts. That command stopped me in my tracks the first time a Zaga asked me that. Somehow she knew how much clutter I was carrying around in my skull. How did she know? Further more, what did she mean? Is meditation ordered thought? The kicker is she was primarily commanding me to order my thoughts because I wasn’t thinking thoughts that were beneficial to the flora and fauna around me and that’s what was most important.

Who knew? I’d been pretty constantly live-streaming relatively useless internal noise. I didn’t often stop to think about what I was thinking and the idea that my thoughts had an impact on everything and everyone around me was pretty foreign. I wasn’t aware I was mentally exhausted at the end of the day not because I’d been performing brain surgery, but because my world had been revolving around my spinning head.

Spending time with the Zagas is like stepping barefoot onto soft fertile earth and suddenly realizing you’re not on earth, you are earth. It’s dissolving into the loving supportive arms of a mother, of The Mother. It’s suddenly noticing the beauty of nuance – the song of crickets, the sound of wind rustling tree leaves, the reflection of sunlight on water – it’s presence and it’s not possible to be thinking and present at the same time and presence is freedom.

Thoughts, it seems, naturally order when you stop thinking. How to explain this phenomenon? It’s a cultural conundrum to think about and it wasn’t easy to get an answer. How was it that I didn’t know how to order my thoughts and how was it that Teyuna did it naturally?

It turns out there is technique and there are steps, and the process could be called mediation, but the Zagas call it pagamento. It’s about deeply listening with the ears of the heart, which is also about being present.

The zagas order their thoughts by being in service. They communicate directly with Mother Nature and do what she tells them to do. How they understand her language is another story and we’ll get to that one day too.

This Saturday the Zagas may share a bit about the pagamentos they do for Mother Nature and how those pagamentos keep them healthy. One thing is certain, they’ll share what arises when they tune into what the spiritual mothers and fathers want them to share and being present to that is always profundity, magic, mystery and priceless opportunity.