As part of the Teyuna Foundation one of the things that gives me great joy in our journey with the Teyunas is seeing the ripple effect that our actions have in their communities as well as in our lives. Recently we were able to complete a project that consisted of building three temples that will serve 7 Kogi and Wiwa communities in the Sierra Nevada.

After the temples were built it was necessary to perform the proper ceremony for the opening of the Temples. An Elder Mamo came to their community for that specific purpose. His name is Mamo Marco Barros and he is a 104 year old Mamo who lives far away in the Sierra. The Clay Pot Baptism ceremony (iba abu bukunzhe) implied the use of a Ceremonial Clay pot called Buku that is made following a rigorous protocol specifically designed for those temples. I need to say that among the Teyunas the ancient tradition of pot making is becoming rare. Two volunteers who belong to the local communities were the temples are located were needed for the making of the Ceremonial Pots. The protocol for the making of the Ceremonial Pots requires extensive preparation by the pot makers that involves one month in complete isolation, following a special diet that consists mostly of eating a bitter fruit (Kumogwa), and spending their time in meditation. Then they needed to learn the actual craft of making the ceremonial pot in a meditative state and following carefully the instructions of the elder Mamo.

As a result of making the Three Temples, now there are 2 members of the community, a Zaga and a Mamo, who learned the craft of making ceremonial clay pots from a 104 year old Mamo who is one of the very few who still have that Ancient knowledge.

What a blessing to be part of this journey.

A very specific kind of Pagamento associated to the Ceremonial Clay pot is needed to treat different types of infectious disease among other conditions.

Here are some pictures: 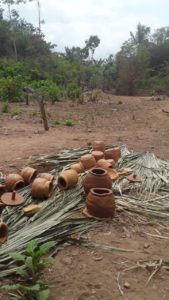 The Teyuna Foundation supports the people who support the planet. Please consider helping us by making a donation.