I’ve been flying under the radar barely keeping up with myself since mid 2019. My partner and I renovated and sold our house and moved and we’re about to launch Teyuna Foundation Colombia.

I’m glad we stayed busy. It felt like being in the eye of a storm while the apocalyptic vibe swirled around us. Daylight literally never came one day to smoke filled skies. The storm’s still raging and I’m still operating from the eye with varying degrees of success. I’ve my part to play in the world, so I wrap the eye around me, set an intention to hold the stillness, and step into the chaos to get things done.

The Teyuna would like me to remind you to not be afraid. Fear propels us toward the illusion of separation and it’s important we keep connecting with community and family and focus on our place as nature rather than in nature. Our survival as a species depends on it. The joy and bliss of love and connection are right here, in our hearts, with us all the time too.

It’s that time of year. The United Nations just held space for leaders representing 476,000,000 Indigenous Peoples in 90 countries worldwide. Knowledge, tradition and culture were shared. Diversity was honored. Most importantly, indigenous peoples came together and dialogued about how they could support themselves and each other.

Progress has been made since the UN launched Indigenous People’s Day in 1994. There are more indigenous peoples self-governing to some extent and autonomy exists in varying degrees. Unfortunately, most if not all indigenous peoples are under the thumb of central governments exercising control over their territories and resources which results in a vie for support. Funding going into the wrong hands makes things worse not better. The global population, the human beings on Earth who know how to walk with The Mother as part of their cultural directive, are fighting amongst themselves for funding. They’re in survival mode. Honestly, most of us live in survival mode these days, but many of us do it because we buy into a false sense of lack, and we do it while drinking clean water and eating well. The world’s indigenous don’t have that luxury.

Can I be honest with you? Foundations exist to put funding where governments don’t or won’t and not enough individuals do or know how to do. How do we support properly? The work is layered and complicated and we have to very careful not to upset a tenuous balance and constantly ask ourselves if we are helping or hurting.

Indigenous People’s Day is an inspiration for philanthropists who most of the time feel like they’re under a ton a bricks. Every philanthropist I know wades in muddy waters between the despair of watching initiatives seed, grow and fail and the joy of real accomplishment. We keep going, doing what we can for the world’s most disenfranchised and impoverished people because we’re helpless to the impetus to do for others what we frankly often keep too busy to do for ourselves. We do it because Indigenous peoples play a crucial role in the survival of humanities collective heritage. Without them, the most precious part of ourselves, what the Teyuna call our segwa, our sacred seeds, disappear too.

Supporting and sharing segwa is what makes humanity special. Cultivating the heart of who we truly are, in right relationship with Earth and with each other is the reason we exist and the only hope humanity has for survival.

We’re in the process of launching Teyuna Foundation Colombia so that we can meet the needs of the Teyuna and assure funds are used appropriately. Infighting not only exists amongst different ethnic groups, it exists within communities as well and there are Teyuna who take advantage of their own community members in order to benefit personally. That’s what being in survival mode is all about and we understand that, so we do our best to resource as well as possible to create as much autonomy as possible at a grassroots level and with deep hope look forward to the day we are no longer needed.

We’re excited about our projects in motion:

1. A land acquisition in Kankuamo territory where Mamo Atilio will offer Arhuaco traditional services including weddings, baptisms and funerals. A horticultural project in the territory will provide food for a large community. Mamo Atilio is connected to both the Kankuamo and Arhuaco lineages. The site will give the Kankuamo a sanctuary in which to reclaim their culture.

2. In Cundinamarca, Colombia, Shindwa wisdom school will be stewarded by Kogi-Wiwa Mamo Senshina and Kogi-Wiwa Habba Maria Luisa Nakogui Mojica. Shindwa is the spiritual foundation of the Law of Origin based in traditional music – vibratory principles that sustain the existence of all living beings. Additionally, Shindwa is the set of teaching codes that safeguard and Strengthen the Law of Origin, the spiritual knowledge and nature. Curriculum will focus on the making and use of traditional instruments, singing and dancing; the Dʉmʉna language, the imparting of physical, mental and spiritual knowledge and the practice of other traditional arts and crafts.

And our new projects:

1. A collaboration with Colombian non-profit Shinawindua Kunshama to archive and share all the known Teyuna traditional rhythms and songs. Follow the link for a treat – 40 minutes of Mamo Senshina singing, drumming and sharing!

2. A horticultural project in La Guajira, One of 3 since 2019. (We also ran hundreds of meters of garden hose to a spring high up in the Sierra so that the community now has safe drinking water) 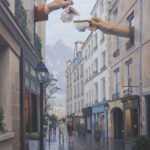 Cuppas – Teyuna meditation and community shares – are back as of TOMORROW. Email mary at teyunafoundation.org for the permanent link and please join us Wednesdays at 6:00PM Mountain Standard Time. We live in an era in which technology has absorbed people, and the aspect of sharing time with one another or socializing with our neighbors people on a day-to-day basis has been lost. We bring indigenous and non-indigenous people together to socialize and share time with one another and to be instructed in the law of origin.